You see that? That is the look of a man who has managed to just barely outrun death at the end of an Olympic triathlon. After that dismal run I decided I really should put some effort into run training. To that end Libby and I have decided to train for a half marathon. I know, I know, ridiculous. But I figure if I can finish the 40+ miles of an Olympic tri I can get my body in shape to run 13.

If you’ve not heard of Jeff Galloway he is the guru of a run/walk method for endurance running. His claim is that by taking regular walk breaks during a long run you save on your body and recover faster without really sacrificing much time overall. ANYthing that adds walk time in the run, as part of the plan rather than as an alternative to dying is alright with me.

The app I am using for training purposes is Jeff Galloway’s Ultimate 10k by lolo. (I really couldn’t find anything that purported to be a “couch to half marathon” app so I had to star somewhere.) At $2.99 from the app store the cost isn’t prohibitive. 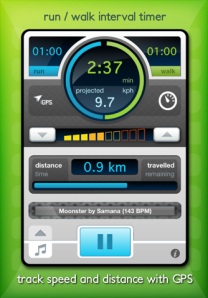 The app allows you to use your own music or the dozen or so tracks that come with it.

Aside from allowing you to set run walk interval, I’m using 3 minute run with a 1 minute walk at the moment, what I REALLY  like about this app is that is matches the tempo of the music to the pace it wants you to run. (Because of that you probably don’t want to load anything too slow or it will wind up sounding like the Chipmunks version when it speeds up.)

The other option I added, at no additional cost, was the extra coaching tips from Galloway. While a lot of them are common sense it works out nice to have him reminding you to keep your posture upright, or not lift your knees too high every once in awhile. Just providing something to think about during longer runs helps.

The interface is easy to read but there isn’t really much reason to read it while you run because you’re given time updates at each interval. Since the workouts are time based turning on the GPS function helps to let you know exactly how far you ran. I’m finding it tends to track a little short (at least by comparing to the odometer on my car) if you have significant sections where you run up one side of the street and back down the other.

The whole program is 13 weeks. I’m currently in week four running two short (2.5-3.5 miles) runs and one longer run (4.5-5.2) miles in a week. The first week the app had me running just under an 11 minute/mile pace. This week it has me down to right around a 9 minute pace even with a three minute warm up walk on the front and another one to warm down on the back. Because the workouts are time based rather than distance based I wind up running longer distances than the estimate for each work out but that probably has more to do with stride length than anything else.

Overall I give this app two thumbs up. The only thing I think I’d change would be to allow someone to set a specific mile pace and have the app adjust to that but the way that it has reduced my per mile time in the first four weeks we’ll see what it gets me to by the end.

With great tools like this one to help you get from the couch to the finish line in a variety of distances what, besides you, is still holding you back?